The glut of greenhouse tomatoes found me making one of our absolutely favourite soups. I wandered down to the veg plot to get a handful of basil. It is growing in the ground next to some cabbages all covered up with horticultural mesh, supposedly to be keeping the cabbage white butterflies off. Pulling back the mesh I saw what I have been hoping for over the last few weeks, an adult Great Green Bush Cricket, as they reach maturity in August.

During the summer we have seen nymphs and medium sized ones, but this was a whopper. I can’t really describe how ridiculously excited it makes me to have this in my field! You can find them in pockets all around the south of England apparently, but this is about as far north as the species occurs. 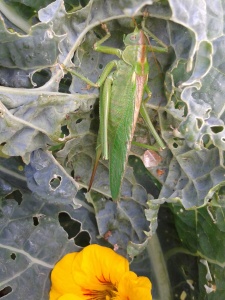 Female Great Green Bush Cricket – I dropped a nasturtium in for scale.

The mature crickets  now mate and the female uses the long ovipositor to lay eggs underground which is where they overwinter, before hatching next  spring.  (These pictures, by the way, are just taken with my Samsung Galaxy phone, which is about as photographical as I can get, but seems to do a brilliant job. ) 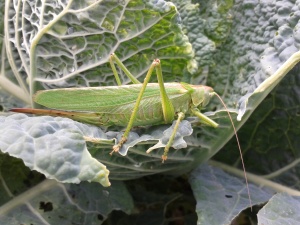 Although we  cut our hay we have left large areas of long grass and the edges of the field are becoming overgrown with brambles and self sown trees – Great Green Bush Crickets lurk in the thick vegetation of hedgerows, nettle beds and thickets, so I am trying to make sure that they have the right habitat here. (Although they obviously like lurking in savoy cabbages too!) 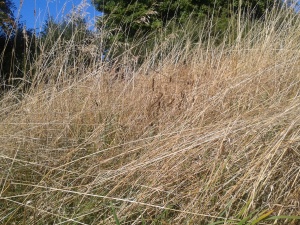 And the soup finally gets underway!

I love warm sunny September days like we have been having, stretching out the last of summer, and the berries are starting to hang in the hedges. My veg plot is richly loaded with produce, it is full of colour and alive with the sound of crickets. Huge, long legged frogs are leaping about, I saw a shy grass snake sliding it’s way back into its hole in the bank and I watched the bats speed diving across the twilight sky at nightfall as I shut up the greenhouse. Close the doors as darkness falls, keep in the warmth.

I think this flower, Wild Edric, might become my new ‘favourite rose’ – because it is managing to grow well in the stony alkaline soil here, and not complain. Sadly, Gertrude Jekyll my really favourite rose is having a miserable time here, sulking and looking like death. I have grown it for years, it is my perfect shade of pink and a single bloom will scent a room – but of course it needs a good soil. Wild Edric is not so refined, but it has a gorgeous fragrance, and I like the velvety pink petals – looks promising. 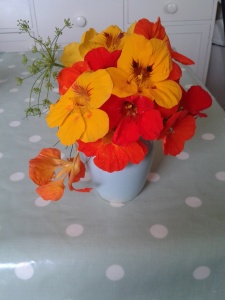 I simply adore nasturtiums, and they seem to have a last blast of growing as autumn approaches. I really like them arranged in little vases for table posies. And don’t forget to eat them in salads too!

I have been collecting herbs for drying this week, somewhat late, but just in time. We are big drinkers here of home grown herb teas and our favourites are peppermint and lemon verbena.

Peppermint is a perennial plant but as it dies down in the winter you can’t use it then. So I find picking off individual leaves, drying them and storage in a jam jar keeps us going for the year. Fresh or dried it is just a case of adding hot water to one or two leaves and I do like sugar added (for the Middle Eastern version). A pot of peppermint is easy to grow anywhere – beware, as it will spread widely in the ground.

In the summer I enjoy fresh lemon balm tea. It dies down in the winter like mints but I find that when dried it doesn’t taste very nice. In my experience lemon verbena is a much better choice.

Lemon verbena is a small shrub which is susceptible to frosts, so certainly here I grow it in a pot and it has to be overwintered in a heated greenhouse, or a conservatory or porch would do. In the summer I have a lemon verbena plant outside and two leaves in a mug of hot water is the most delicious drink.

I have also been gathering parsley and dill for the freezer, as I can never have too much of these for cooking. We love vegetable stews with lots of dill in them – youngest child went to stay in Russia one winter and there she said everything was flavoured with dill – so we call it ‘Russian stew’. Both these herbs I wash and just stuff them into freezer bags. Once frozen they will crumble up nicely, and I even use the parsley stalks in soup.

Parsley and dill ready to freeze

We had always hoped to have a compost loo (a strange thing to hanker after I know). Anyway this forever house was definitely going to have one. For two years I have pondered over the best spot to put it in. It is basically for use in the veg plot and field areas, which are a long way from the indoors loo.  So I settled on a site half way down the field at the bottom of the orchard area in the shade.

Now in particular our long held aspirations in this department are inspired by the Dry Earth Closet which was patented by Henry Moule, a friend of Thomas Hardy’s in 1859   – this can be seen in the Dorset County Museum in Dorchester. (I won’t even try to explain our current connection with the Moules and what I think about Thomas Hardy- that would be a rambling not a blog post).

This is a simple system that gets a fresh bucket when required. After at least twelve months the resulting compost will get spread on fruit trees or coppice as a fertilizer.

And so it was, that work began at Tin Bath House on the Compost Privy –

The framework in place

And then ‘shock and horror’ – our neighbours came round to tell us they are not happy about a compost loo like this near to their field, and please be obliged we are not to use it!!

I asked second child what he thought about this after all his hard work and he said ‘pissed off’. You can say that again!

It has been a great year for tomatoes and I haven’t heard anyone complaining about blight.

In my greenhouse the crop is doing really well, even though I have been in hospital and relied on friends and family to look after them – thank you to all my helpers.

I planted one tomato outside in the spring just for comparison, and to see how it would fare since previous years have been a right off for outdoor crops. However, it has grown well all summer and surprised me with a massive crop of fruit – the only difference to the greenhouse ones is that the tomato fruits are not ready and ripe yet. Therein lies the benefit of growing indoors even during this summer which has turned out to be a hot one. I will pick these wonderful tomatoes soon and ripen them on a windowsill – they will be heading for passata.

I always stop the growing tips, pinching them out, on cordon tomatoes at the end of August and start removing the lower leaves to allow the fruit to ripen in the sun. (Any fruit that you allow to form after that will not mature.)